Started out digging and all went well untill 30cm down we struck sandstone. 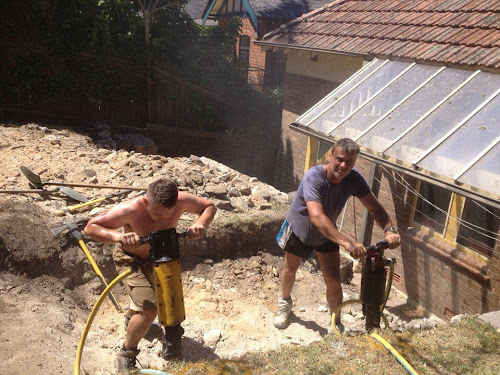 It took quite a while to get the stone out as it went dow 1.7 meters. 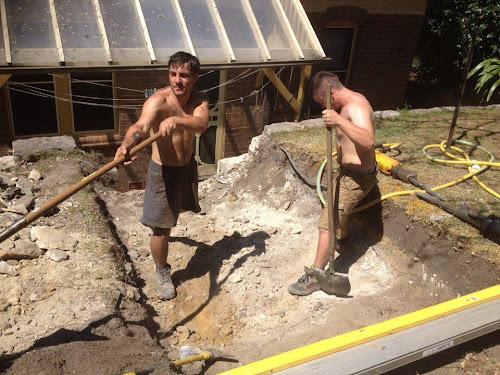 So eventualy we got down to the right leveles and made a concrete form to pour the steps. 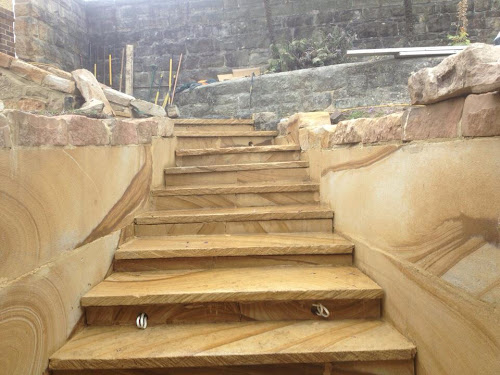 Before you know it we had steps. 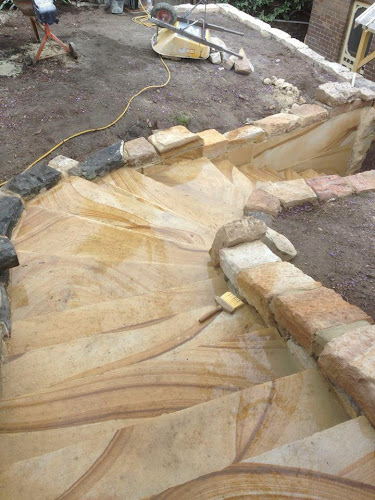 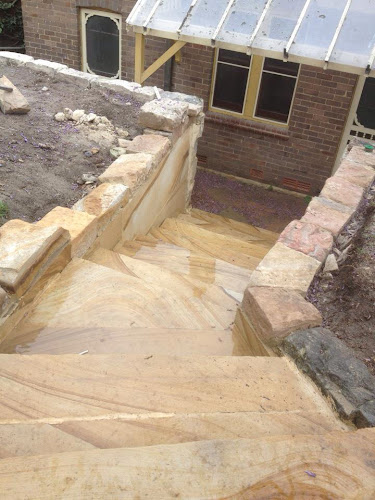 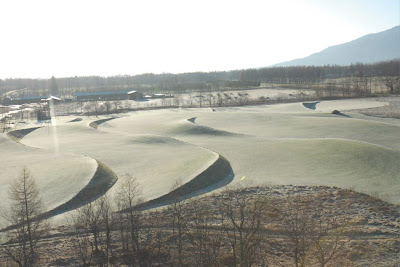 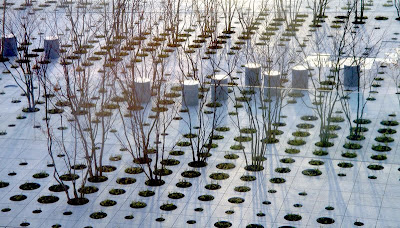 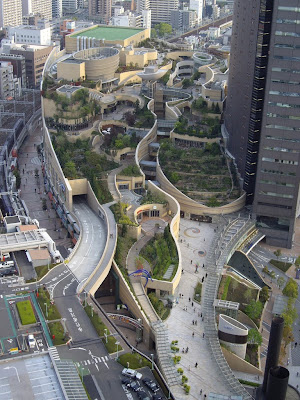 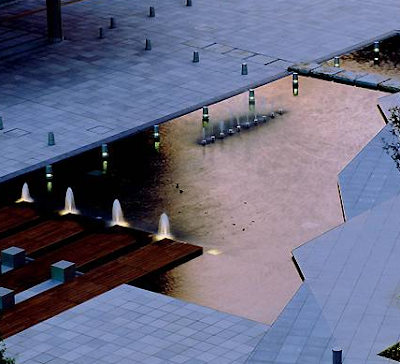 One of my most memorable teachers, David Buck. The above is Buck's design for the Osaka City University Media Cente Plaza with Makoto Noborisaka for Nikken Sekkei.

Posted by propertymaintenance at 10:59 PM No comments:

A path meandering through a garden can serve many purposes. They can be fun, enlightening, whimsical – they have a gazillion different possibilities. Their substance can be paved or loose gravel and every thing in between – in fact, the composition and the design of garden paths could be a website and a discipline all its own. 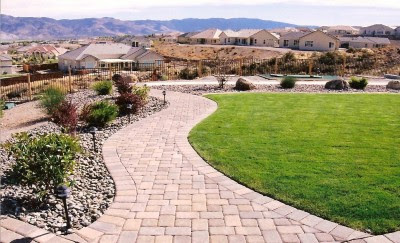 Obviously, the most common reason for a garden path is to allow persons to see and work there. The other “most obvious” use is to actually get somewhere – across a garden to the back fence, to a shed or facility. But it can often be “designed for discovery” – small surprises beyond the eye which are revealed by traversing the path. It can be designed for an overall organic focus – a sort of ‘Feng Shui’ notion, operating to organize a garden into elements which not only stand out but which fit in perfectly with their surroundings. An open door or window in a fence can absolutely welcome us – revealing its “purpose” when we accept what it asks of us and we look or wander through it. In Classical Chinese Gardens, like this one in Portland, Oregon, both the composition of the walking surface and the openings play a role in making us interested as well as comfortable in a rather formal setting:
(click any image to enlarge) 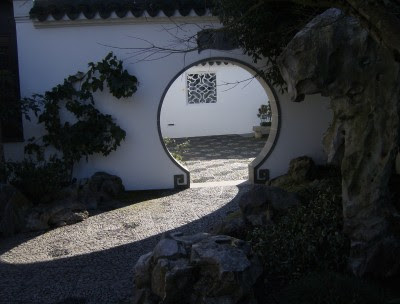 Our own homes have a similar but different demand. We are less interested in being formal, for one thing. Plus, we don’t have budgets to support what a Chinese Garden can supply. We also have a secret: we can do whatever the heck we want and make it look good over time. And sometimes, simplicity rules anyway: 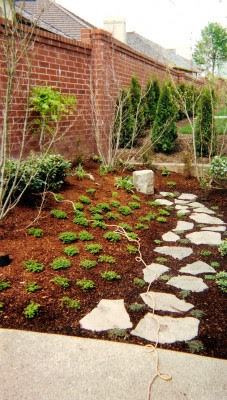 The basic idea is to keep the feet out of the garden dirt, to keep feet from compacting soil and disturbing the overall look in general. One can use any number of products – here, for example, is a system of round exposed aggregate stepping stones wandering around a water feature and providing access for a hose and a place to watch duffers plying their addicitons on the golf course below: Natural stones, too, can provide a gorgeous walking system in a garden. Set close together, as in this grouping, it’s the next thing to a sidewalk: This one winds for quite a while, out into the garden. From here: Alongside this “swamp” we engineered – “where the wild things are!”in this home, stuck as it was beneath the level of the road out front: 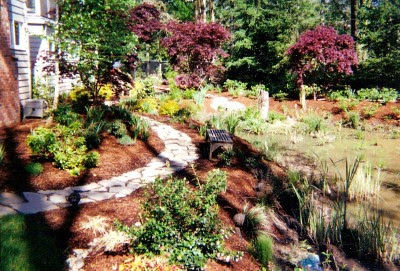 The series of Panorama pictures from my older files below show the path as it wanders alongside the edge of the bog. Its terminus is the little “mini patio” where the bench offers a relaxing place to enjoy the riot of all the various bog plantings we were able to conjure up, including flowers which don’t exist outside of real wetlands:
Please enlarge for the real effect.
Posted by propertymaintenance at 10:53 PM 4 comments:

Pebble Pathways
Pebble Pathways are a specialty. I have done just a couple in my day but I have so enjoyed looking at those done by others, I’m actually late in speaking of them. The above is from the Portland, Oregon Chinese Garden and – to me – represents the absolute “state of the art” of the Pebble Path. Embedded in a loose layer of wet cement and arranged painstakingly (obviously!) the makers keep their supplies nearby and reach around to grab the pieces, then they fit them meticulously into position. It was interesting watching them make these paths – and I only saw them beginning rather than all the way through – but these guys were definitely specialists. What was perhaps even more remarkable was their speed. Believe me, they’ve had practice. I have mentioned before in this blog where I was involved in this project myself, along with a couple of other souls from Teufel Nurseries in Portland.  One of my mates on the project was John Stone, currently an independent and very good contractor in Portland and Southern Washington. Here is his website. In fact, I describe much of our role in this exciting and hugely rewarding project in this blog under the category of  “Chinese Garden” in my “Categories” section. 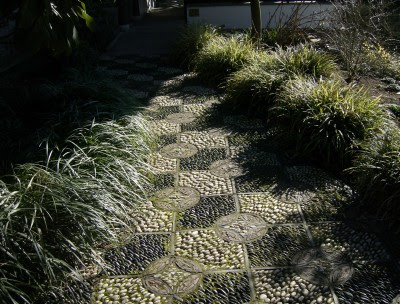 Of some irony, during the construction of these pathways in Portland, a somewhat substantial amount of the pebbling had been accomplished when they were suddenly informed of a local building code which insisted that all “pebbled surfaces” were not to have more than a 1/8th inch depression. Since the ancient Chinese trait of providing such depths as a quarter inch – best for “massaging the feet” while traversing the -path – they had to redo what they had already done. The purpose, strictly non-judgmentally speaking, was for the ease of travel for wheelchairs and handicapped resources. Whether it made any difference whatsoever would be the question but – to their credit – the constructors sighed and went back to work. What led to me to this subject, in fact, was seeing the mosaic work of Helen Nock, who I featured below in this blog, the wonderfully creative British designer and maker of exotic and artful garden furnishings, among her other talents. I was reminded of a few projects we’ve done where we inlaid a rather “Mosaic” pattern of not only other pebbled pathways, but with bricks as well. When one does a mosaic pattern, one gets this sort of “Fractal Sense” of the smaller role of the mosaic pattern being subservient to the overall ambiance of the project – the macrolandscape – itself. By exploding in artistically free small patterns at the more “micro” level, we make fascinating details which are never necessary whatsoever, but which add so much of a human touch. Below is a simple sort of construction we laid by cementing bricks over a barren, glaringly white “porch scape” of plain cement. Note the circular pattern of the bricks by the doorway. In the bricky world, this is so much trouble as to be almost self-destructive to a budget unless it’s factored in. Naturally, in my case, I gave the sucker away! But the clients actually made up for it. They were somewhere beyond pleased. This picture can be enlarged quite huge by clicking twice, for the full effect. 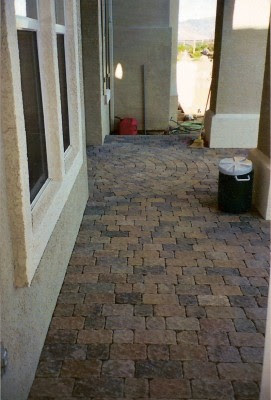 Here’s what it looked like from the front, after the lunch pails were removed: 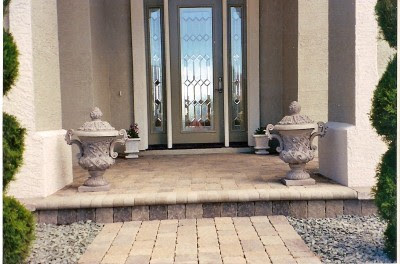 And one final look at paver mosaics, in this case the picture at the front of the Toronto Music facility, a public arena dedicated to music, as evidenced by the fascinating mosaic trends shown in the pavers out front. The designer used a computer simulation of musical chords – I bet Jazz, lol – to render this undoubtedly maddening project for his installers. Back To Pebbles:
There is a simply fascinating potential in constructing walkways and paths in these pebble finishes. There is literally no limit in possibilities. Indeed, Pebble Mosaics are a virtual art form of their own, some hanging in frames as representational art and others playful scenarios developed from the whimsical and fecund minds of homeowners and “amateurs”. I use the amateur term advisedly, as many of the best landscapes I have ever come across were done by the persons who lived where they worked. I’ve said this many times, but my respect for these folks is over the top. The best landscapes in the world can be those you happen onto visiting a party or dropping by for any purpose, into a back or front yard you never knew existed. Suddenly the floor moves. Patience, a good selection of stones for the project, a great base of, say 3-4″ of unfinished cement upon which to work (a surface and finish we in construction often refer to indelicately as a “rat slab”) and a slurry of moist cement is about all one needs to get tight with the Pebbling Art. Here are some random pictures of other pebble art projects – not my own. The first 2 are more of the Chinese Garden in Portland, with the first picture featuring a multifaceted quartz-dominated walkway: 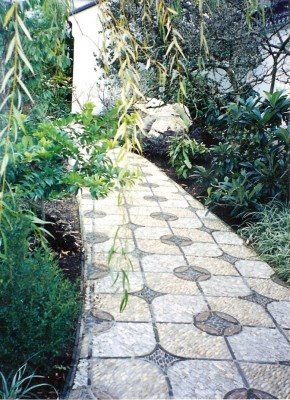 This one is made even cooler by the plantings alongside – never to be underestimated as the adjunct of choice: